This post is behind a cut due to intense discussion of sexual violence and stalking behavior.

END_OF_DOCUMENT_TOKEN_TO_BE_REPLACED

I’m in a wonderful relationship, but we’ve got a Darth Vader ex-girlfriend lurking on the sidelines. When we first started dating she behaved horribly: showing up on his lawn screaming suicide threats when she found out I was over, harassing him for months, hacking his email to get my phone number to send me threatening messages, etc. She backed off after he threatened to get a restraining order.

BF left a lot of his things at their apartment. He couldn’t face making a second trip to get everything when he initially left, and then was too afraid to ask her to send it to him. He was also just trying to get his life back together, as you do after escaping an abusive relationship. Then the whole mess above happened.

He’s joked that losing that stuff was a fair price to pay to get away from her. But lately it’s clear he wants it back. (He also has a narcissistic mother who’s gotten rid of a lot of his belongings without his permission, so I think a lot of it is about gaining control over his property and life.) The stuff in Darth’s possession is mostly memorabilia and collector’s items. We’re pretty sure she still has them because she latched on to his interests during their long-term relationship. But we are both at a loss about how to approach her about it.

Their relationship was extremely toxic. Darth has Borderline Personality Disorder. I hope she’s gotten help, but the Darth my BF knew was volatile, argumentative, irrational, manipulative, and occasionally violent. He is extremely wary about contacting her. We don’t want to trigger her or become a renewed target, especially since we’ll be at the same smallish convention in a few months. Because of her BPD, she probably still views herself as the abandoned victim. Six months ago we saw her at a concert and the way she reacted made it clear she wasn’t over him. According to the grapevine, her current boyfriend is an emotional prop she openly resents, so it’s possible she’s not over him even now. Contacting her might end up being fine… or it might make her act out in any number of ways.

What should we do? Any scripts or advice on enforcing boundaries, minimizing contact, and controlling possible fallout when attempting something like this would be really appreciated. BF doesn’t want trouble … he just wants his things back.

Is the value of the stuff such that it would be worth hiring a lawyer to deal with the entire thing from beginning to end, from sending the request to potentially taking her to court if she doesn’t comply to actually picking up the stuff? Like, it’s $50,000 worth of stuff and you think it would take $10,000 of lawyering to get it back, and you have the $10,000 lying around and you also have a free year of your life to spend on this problem?

Because my recommendation is: Buy new stuff.

END_OF_DOCUMENT_TOKEN_TO_BE_REPLACED

I have some practical things to add to  today’s Bibliomancer column (which I love reading, but today = eeeeeeesh).

Letter Writer, whatever you decide to do about investigating & interrogating the effect “Doug” holds on your past, there is some practical shit you can do to get the actual dude out of your actual life. You obviously wrote for literary advice, so here is a book recommendation: The Gift of Fear by Gavin De Becker.

1. You are not overreacting. BLOCK.

2. Ask your friends to block him without further ado. Don’t apologize. “That dude is creepy, he is messaging me and insinuating himself among my friends in violation of my express wishes, please block him. The best way is to do it without comment or prelude, just refuse all contact and don’t respond to anything from him.”

3. Filter his emails so that they bypass your inbox without you even seeing them. I would tell you to block him there, too, but you may need them later in case he escalates his behavior.

4. You’ve already told him that you didn’t want to be in touch with him, and he kept writing to you and in fact, escalated his efforts to be in touch with you and make sure you’d notice him. Telling him again won’t really register or make a difference, it will just confirm that he has your attention. The only way to dispel this particular kind of ghost is to starve it of your attention.

5. AAAAAAAHHHHHH I HATE DOUG I HATE HIM SO MUCH I AM SO SORRY THIS IS HAPPENING TO YOU

7. You are not “bad at relationships.” You are a survivor of a relationship with a manipulative and controlling man. Here there be ghosts, and ghosts, and ghosts. But you are not doing anything wrong by wanting him out of your life forever.  give you permission to go ahead and hurt his pathetic little stalker fee-fees in preservation of your own peace. He has no right to keep intruding into your life when you have asked him not to. He needs to dispel his own ghosts on his own time.

I broke contact with my family and moved across country from them ten years ago. It was a decision made by several years of mixed bag abuse. My dad is a creepy stalker who still haven’t given up and the police have been involved more than once. I have no hope that they’ve changed their ways.

Now I’m moving back. I got a job offer that’s just to good to ignore. I don’t want anything to do with my family. I’ve Googled them so I know where they live. I’ve done the therapy and anxiety meds route. My therapist claims that I’ll be able to run into my family without any big hoopla, and on a good day I believe her. I’m not there yet but it has become easier each time in the past. Less of a shock and easier to stand up for myself.

I cut all contact with several friends and gave up interests in hope of being left alone. Now I want reconnect but I’m scared that my family will find out. I have an old flirt who I’d love to catch up with but his family is basically besties with mine. Is it worth the risk? Any good scripts for why I haven’t been around for ten years that doesn’t invite too many questions?

On one hand I’m looking forward to seeing some old friends and re-starting hobbies. I love the city and I’ve been there before several times without incidents. But OTOH, I’d be right there! Like an hour away. What if something happens and I can’t get away? All the self defense and martial arts training doesn’t help much against people who think their abuse is for your own good.

Whenever I read or see anything about stalking, I always end up dwelling on the unfairness – especially the financial unfairness – to the victim. Moving costs money. Beefing up home security costs money. Having to go to court for restraining orders, etc. costs money in terms of lost wages. Leaving behind possessions costs money. Changing one’s name costs money (and more than money). Therapy costs money. Leaving behind a lifetime of professional contacts and friends and a sense of belonging has costs – both financial and emotional. Being fired from your job because your workplace is afraid of your stalker costs money. And stalkers know this. They love it. They use it. They try to make it as expensive as possible as a way to control you. What is the price of feeling safe? And even if you pay it, do you ever really get safe or feel safe? Stalking is violence; stalking is also theft.

END_OF_DOCUMENT_TOKEN_TO_BE_REPLACED

I am the LW of the “how do I break up with my mean ex who scares me?” Recently I have received harassing emails and blog comments from his new girlfriend telling me I am a liar and a bunch of other such things. Also telling me to stop “making up stories of my abuse.”

I emailed her back and said, “Sorry you do not believe me, but I am not lying. I am blocking your email so you cannot email me again.” Is there a script I can use that is better in case she tries to contact me again.

I am really upset about this. Not so much because she doesn’t believe me/he is lying about what he did but because it is dragging up things I want to forget.

Thanks,
Not Making It Up

Hello again, Not Making It Up. I am so glad that you are out of that relationship, and so sorry that he has spun his girlfriend up to harass you by proxy. She’ll probably find out soon enough that you were not making things up, and the thought of that is just so sad to me. I can’t wish that on her, not for anything, even if she is being a jerk to you.

I think what you said to her was just fine. Going forward, my advice is to block her from leaving comments on your blog, and if she contacts you again, just don’t respond at all. Every time you respond, your ex-boyfriend gets the satisfaction of knowing that he’s got your attention again. He’s using her to try to manipulate you, and stories of you to try to manipulate her, so that both of you have to think about him and each other and feel crappy, because he is an abusive lying shitmitten.

If you leave it totally alone, eventually they’ll leave you alone when they figure out that they can’t capture your attention. Someday you’ll probably get a message that says “Sorry, you were right about everything.” Hopefully this will all be so far in your past that your first thought will be “Wait a second, who?”

In the meantime, they’ll probably find ways to ping you now and again. Each time, delete/block whatever it is to the extent you can, do something really nice to yourself, and congratulate yourself for getting out from under the thumb of this guy. Your life is so much better now, right? And so much better than this lady’s is. You are brave and smart, and you can definitely handle and outlast this.

END_OF_DOCUMENT_TOKEN_TO_BE_REPLACED

If reading about suicide and suicidal ideation would be troubling for you, stop here.

END_OF_DOCUMENT_TOKEN_TO_BE_REPLACED 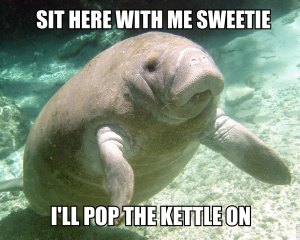 Hello, friends. Here is a photo of a calming manatee and a wee child. Here are baby bunnies sleeping. Here is a female film director holding her Oscars. This is Bates from Downton Abbey wearing a flannel shirt and holding a baby. This is two female Navy officers kissing and telling. This and this are network TV shows with complicated, three-dimensional protagonists played by brilliant black actors.

Find some image that makes you feel okay and hopeful about the world, because we’re talking about stalking again.

I started seeing my current boyfriend in fall semester of this year, although the fact that we had both had bad experiences with long-term relationships led to us taking our relationship slowly and not becoming “official” until the beginning of spring semester. His ex-girlfriend was abroad when we first started dating and came back for spring semester. Through a friend she shared with my boyfriend, she discovered our relationship and has been harassing me ever since. At first it just involved her blocking me from an on-campus organization I wished to join, which, while unpleasant, is hardly unheard of. However, it quickly escalated to her actively damaging my reputation, verbally abusing my friends, physically knocking into me when we happened to cross paths, and even pouring a drink on me at a party we both happened to attend.