My brother died suddenly in an accident in May. He was my only full sibling. The only sibling I grew up with and lived with. I also have 3 older half siblings from my father’s first marriage- we’re not super close, we see each other at holidays and text quarterly updates. After the funeral, I had to plan my wedding happening just 8 weeks after my brother’s death. The trouble starts when I am texting with T (the oldest half sister) and say that I am having a hard time because my mother is emotionally unavailable due to her grief. T has a tense relationship with my mother and uses this moment to tell me how unreasonably angry my mother was acting when she last saw her. I am LIVID and stop responding. T says “sorry, it just made her sad.” I lose a day of wedding planning to being angry and trying to figure out how to respond. I give up and send no reply.

In the following weeks, T sends a message explaining her behaviour and then tells me that I am acting unacceptably. I tell her that I need some time and space. My other sister K is sent to get some answers and I tell her to mind her own business. T gives me 10 days and then tells me I’m being abusive and I’m just mad because her siblings are alive and mine is dead, that everyone was at her wedding and my brother won’t be at mine. She doesn’t want to come to my wedding because she’s not sure if I even love her anymore. I tell her that needing space was about me not her. At this time she also makes a plea to my parents to get them to make me talk with her- they say she should just leave me alone. My father sobs and begs T to attend the wedding.

At the wedding, T shows up late and leaves early. I generally avoid them and have a fine time. After the wedding she blocks me and my parents on facebook and gets her husband and mother to do the same. I text T that I am available to talk now, but understand if she needs space. No response. I text K and say apologize for being snappy and telling her to mind her own business. She blasts back demanding I take responsibility for everything – for making my “wedding into a battle ground”, shattering all of the relationships, and “single handedly tearing our grieving family apart”. I’m at a loss. Am I selfish? Are they? How much of this is my fault? Should I just cut my losses? Help?

-One wedding and a funeral

END_OF_DOCUMENT_TOKEN_TO_BE_REPLACED 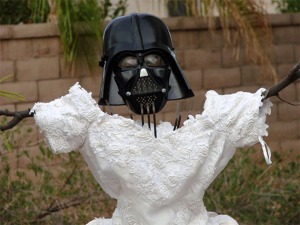 This perfect image is from a book by a man who decided to repurpose his ex-wife’s wedding dress in 101 ways. Click the photo to learn more about anger + recycling.

I have found myself in a weird Darth Vader situation, and I’m not sure how to handle it while still maintaining my own principles and values. I’m fully prepared for, “Just stay out of it,” but in the hopes that there’s different or more comprehensive advice, I figured I’d ask.

My partner and I are in our late twenties, and are excited about moving in together soon. He is very close with his family, both immediate (parents and two brothers) and extended, and he spends a lot of time with them, at least compared to what I consider normal. It doesn’t bother me, and I’ve really enjoyed spending lots of time with his family, getting to know them. We’re crazy about each other, and see this as the forever-relationship, and so becoming part of each other’s families is important to us.

One of his brothers, however, is engaged to Darth Vader.

Her Dark Side of the Force behaviors that are most obvious are that she is very controlling, she isolates him from his family, and she verbally berates him–even in public. To elaborate:
– She often speaks for him when people talk to him, and will even “correct” him (e.g. “No, he won’t have any dessert,” even if he originally said he wanted it)
– She likes doing everything together, but doesn’t like spending as much time with his family (understandable, since they don’t like her), and so he won’t come to family gatherings very often
– She has put him down in front of friends and family for very unimportant things, such as his driving abilities. Sometimes, she yells at him–again, in front of people. It’s not affectionate or joke-y in any way

The family has disliked her for a long time, and I think they were hoping that the brother would end the relationship before it got to this point. I know that the brother has some idea of the dislike; he does not confide in his brothers or parents about his relationship. The family is already too afraid of losing him to voice any of their concerns.