It’s time to be awesome again this year, so please bring something awesome to talk about (an object, a photo, a newspaper article, etc.)

The venue sell food in a cafe (standard sandwiches etc.), but they also don’t mind people bringing food in from outside. The food market is usually shut in January, but there are several other local places where you can buy stuff as well.  You can also bring a packed lunch.

Meet on the fourth floor, outside the Green Bar (go up in lift 1, sadly not as musical as lift 7).

Here is the accessibility map of the Royal Festival Hall: PDF map

I have shoulder length brown hair and glasses, and I will bring my plush Cthuhlu, which looks like this: 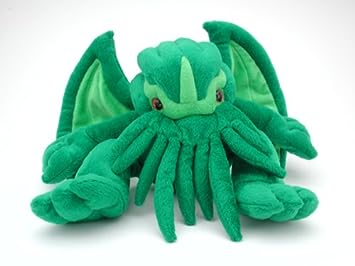 The venue is accessible via a lift, and has accessible toilets. Waterloo tube station has step free access on the Jubilee line but not on the Northern line.

The London Awkward group has a Facebook page, which is here: https://www.facebook.com/groups/549571375087294/. There is also a thread in the new forums for saying hello.

My email is Kate DOT Towner AT Gmail DOT com

(February meetup will be the 16th.)

One thought on “January London meetup”