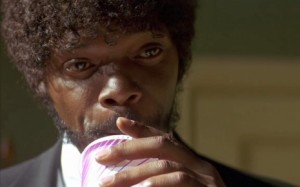 “That had better be one charming pig.” – Jules, Pulp Fiction

I have a problem. I am a feminist. Why is that a problem? Because my boyfriend, as generous and thoughtful and funny and sweet as he is, doesn’t get it. At all. We’ve been dating for over a year and I love him, which is what makes this so hard. About three months into our relationship, I noticed that when I’d bring up some women-centric issue (i.e, the Steubenville rape case), his argument was “Well, she shouldn’t have been drinking so much.” Which, of course, is awful and, yes, I may have gone to bed angry that night.

I chalked it up to him just “being a guy” and being influenced by the world’s habit of blaming the victim, etc. But then, as our relationship progressed, these things just kept. popping. up. To the point where he told me that he believes in Men’s Rights and he thinks feminists are crazy and damaging. I’ve told him my feelings on this and how hurtful and scary I think these opinions are. He’s told me that he may be influenced this way because of a (really bad) past relationship, a relationship which I knew all about when we started dating.

If I knew he had these opinions and this hate back when we first started dating, I would have walked away in a heartbeat. But I’ve been sucked in. I love him. But every time this comes up, like if there’s a news story that’s big (Gamergate and the Ugly Shirt Comet Guy were big topics) where he feels “feminists” are getting out of line, I feel sick inside.

I’m embarrassed when we go to parties and my level headed friends (both men and women) don’t share his opinions, I feel my stomach tighten when I’m browsing online and see a story about feminist issues – not because the story makes me upset, but because I’m worried about what HE will think about it. I’ve honestly told him ALL of this and he doesn’t want me to change my opinions for him. He says that my opinions and views don’t change the way he feels about me. But do they change the way I feel about him? I think so.

I know all of this sounds like a laundry list of reasons to break up. But he has so many fantastic qualities and there’s a reason I’ve stuck around this long. Do you have any suggestions for how to… I don’t know… fix this?

First, I guess I should congratulate you on finding possibly the world’s hottest and most charismatic man, the apocryphal Brad Pitt in all MRA arguments about how women are unfair when they have preferences about which men they interact with and how, i.e. “You’d put up with vile and creepy stuff from an alpha like Brad Pitt, just not meeeeeeeeeeeeeeeee.”

Digging into this more, you’re both “allowed” your opinions, but you’re the one whose stomach is in knots when you see a news story that he might have a different opinion on? You’re constantly embarrassed when he’s around your friends? And one bad relationship with a woman turned him against all women (except for you)?*

Here are some concerns, expressed as questions:

Looking more ‘sheveled than usual. Def. has time to follow women into elevators and stand too close to them on public transit.

It does in fact sound like a laundry list of reasons to break up (or re-read The Lysistrata), but you do you. Your decisions about your life and your heart are your own. Some people really get off on the whole Opposites Attract/I Have Found The One Good One vibe, or think that systematically destroying each other”s arguments is a form of foreplay, and you two might be those people. The thing you have to know going forward, though, is that you cannot “fix” another adult to make them be more how you want them to be. You can decide to love what’s there, you can disengage, but there’s no fixing them, and as soon as you see the other person as a collection of things that needs fixing, the relationship has a hole in the bucket, Dear Liza.

I guess the most optimistic thing I could say is that many of us go through a period in our lives where we try out extreme views of one sort or another that don’t hold up over time or with more experience and self-awareness. True story: I was a vocal libertarian** for two semesters of college, and I apologize for anyone who was in any kind of discussion-based class with me back then as I tried on the the position of The One Person Who Could Clearly See The Flaws In The System That No One Had Ever Seen Or Pointed Out Before. I do think that some of the young dudes who are very, very concerned about ethics in game journalism right now are going to feel super-sheepish about the whole thing before long, with the caveat that having ridiculous views is one thing, harassing behavior is another, and that no one is required to hang out and be someone’s Humanity Tutor. You do NOT have to be the shining example of womanhood who melts his steely heart and shows him the way. “He might grow out of it” isn’t a ringing endorsement, and if you are both, say, 52 instead of 22, your Nope Rocket awaits you.

*This is the fishiest logic, to me. After millenia of oppression, violence against women, centuries of being legal property, straight women will still find something to love about and root for in straight men. But one bad relationship is an excuse to hate women and think they deserve fewer rights than men? Oh wait. Except for you. You the shining exception to all other women. Until you mess up in some way, of course.

**Apologies to actual libertarians out there in the crowd. 18-year-old me was definitely one of the obnoxious ones who ruins it for the rest of y’all.

January 25: Well, the MRAs have found us, judging from the amount of sexist drivel and “shut up you fat cunt” comments now circling the drain of my moderation queue. FYI, my banhammer is a ball peen hammer, the most hilarious of hammers.  I’ve harvested enough male tears for my morning tea, and I’ve got things to do today besides systematically oppress men and censor their free speech, so comments are closed. Have a good Sunday, y’all.