Elodie made this infographic which neatly describes the frustrating part of advice. 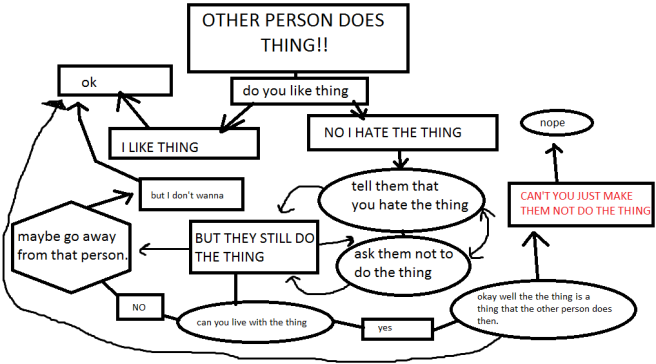 Lily B summed up our recent discussion on removing predators from social spaces very beautifully at myloveinthug.tumblr.com:

“whenever there’s a piece about “tell young women not to drink so they won’t get raped” (like young women aren’t told that all the time!) there’s a lot of responses like “why don’t you tell men not to rape!” which is true and good insofar as it places the blame in the correct place. but it’s also in some ways unhelpful, because maybe some men who rape are going to be responsive to education, but i suspect a huge proportion are just fucking predators who don’t give a shit and never will.

so with that in mind i think what a safe space looks like for women (and other people who are preyed upon) is more about one where PEOPLE HAVE THEIR BACK. captain awkward talks more about what this means in practical terms – it’s important both in the moment when you see something sketchy going on, and after a person has been victimized, when they tell you about it or it becomes known to you. when i think back on my assault i wish that just one person had had my back. i was at a party where i thought i had friends, but ultimately i was alone, that night and afterwards. i can’t go back and be that friend for myself but i can try to be her for others, and so can you, and i hope you will be.“

Lily gives rocking advice on topics like how to choose glasses correctly and also for how to take care of yourself when you are feeling low and dealing with bad stuff. Such as:

“…6) practice compassion, and i mean practice in the “practice piano” sense of the word. sometimes on public transportation i like to look at all the people on the train or bus in turn and imagine how each of them might be feeling, think about the heavy things in their life they may be carrying, and try to feel kindness and love for them. this kind of thing also helps when someone is irritating you. we all have a lot of struggle in our lives – think about the ways your life is hard that strangers and even friends don’t know about – and remembering this can be the key to having warmer feelings towards everyone, which feels good.

It reminds me of some of the threads we’ve had on poor self-image, where readers have suggested looking at strangers and practicing seeing good things about them as a way to retrain your eye away from being so critical of others.

What’s your favorite thing on the internet right now? One link only, please, with a short description of what it is. Orphaned and/or multiple links are a sure target for the spam trap. Self-promotion allowed.