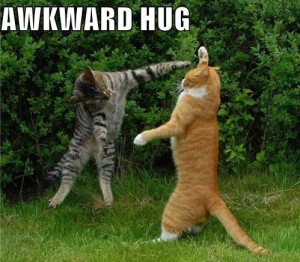 I have a social situation question: What do you do if you don’t want to hug someone, but they want to hug you?

This has happened to me about three times in the past 6 months, all with guys. I don’t think they were trying anything creepy, just trying to be friendly or comforting, but I just didn’t feel like our friendship was at the hugging level yet. In all the cases, they swung their arms up, like the Jesus statue in Brazil and I felt like I had to proceed with the hug, even though I felt uncomfortable.

Welcome to my awkward wheelhouse.

Saturday night I was at a party, and someone wanted to hug me, and I did not want to hug them, so I stepped back and gave them a fistbump.

They probably felt a bit taken aback and awkward about it.

I don’t care. I would rather risk a temporary awkward moment than have to be nestled against someone’s body when I don’t want to be.

Our culture is all about pressuring women to just go along with things they don’t want to do in order not to make men have even momentary sadfeels, so I’m not surprised your ladyfriends advised you as they did. They probably have felt exactly as you do at times, and maybe even refused a hug, only to find themselves on the receiving end of a manly tantrum of “I WAS JUST TRYING TO BE NICE WHAT IS WRONG WITH YOU” so they want to help you avoid such awkwardness. You risk the man-tantrum (mantrum?) pretty much anytime you decide that your time, or your smile, or your body belongs only to you.

While it can be difficult, I think it’s good to challenge this notion and back away from hugs you don’t want even at the risk of momentarily upsetting someone.

“Sorry, not up for hugging right now.”

“I’d prefer not to hug today.”

“You’re nice, but I don’t feel like hugging right now.”

Do not explain why. There are a zillion reasons why. “Come for the personal space invasion, stay for the norovirus!” is a reason. “Don’t feel like it” is a reason. Anyone that drops criticism and anger on you for not wanting to hug, visibly sulks, or demands a reason is displaying their sense of entitlement. They are the ones in the wrong, and you don’t have to hug them.

If you’re wondering what to do when you offer a hug and someone steps back, the correct response is to put your arms down and take a step back and then resume normal conversational activities. You don’t have to do an apology shame dance, just take a step back and go on being friendly. Don’t read too much into it! If the person keeps generally acting like they like you, then they like you, and this wasn’t a permanent referendum on that. They’ll probably like you more for being relaxed about it, because you are showing that you are a person who respects a boundary, and you’ll know to let them take the lead for any and all hugging in the future. This is probably a good time to remind people that it’s better to ask if someone wants to be touched and give them a real opportunity to answer you than to rush in like Cristo Redentor.

Thank you so much for your generous pledge drive donations! These friendly reminders will end after Monday. I hope you have a great weekend that includes only nice hugs and the freedom to say no to unwanted hugs.