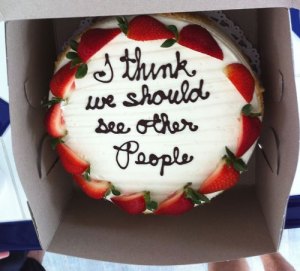 The internet is surprisingly full of breakup cakes, though on second viewing, this could also be a “Hi, we’re poly!” cake.

I have been seeing my boyfriend for a little over two years now, off and on. I have wanted to break things off for many reasons (lack of ambition being a key one) that he has promised to work on (although I haven’t seen a load of progress but maybe thats another letter). Every time I have broken it off he promises to make big changes and then either returns to his ways or offers small token changes (look honey, I loaded the dishwasher myself! (this man is 26 years old!)). I wouldn’t mind the incremental changes if it hadn’t been such a long progress and the amount of times he has promised to change in a BIG way.

Here is the other key factor: he has Aspergers. This cluster of traits creates an atmosphere of feeling like my activities, passions, and interests are not as important as his. He interrupts me. He talks down to me. He mansplains. I have called attention to these traits and he seems surprised every time–like he wasn’t listening or just doesn’t care enough to actually pay attention! He assumes he knows everything there is to know about me and refuses to ask questions about my opinions, thoughts, or feelings. (I have brought this up many times–he says his Aspie-ness keeps him from being able to think of any questions (Can someone please verify if this is a thing or not???!!?)).

I will admit that I stayed with him for a while because of the (excellent) sex. He was my first, and I come from a background where that is a big deal. Lately, however, the sex has gotten to be something I dread–I’ve been getting drunk in order to cope, I flinch, I wake up crying–and when I figured out this was sex related and told him he was genuinely shocked. (Remorseful and sad, but totally surprised.)

I’ve tried reaching out in so any ways to get up on the same page, communication wise, but I feel like I am the only one working at it. He would think that was a totally unfair statement–but I am so tired of doing the lion’s share.

Am I being too demanding to want him to live up to his big dramatic promises? Do I owe it to him to keep “working” on the stuff he says he is working on? What do I do about the fact that I cry when I think about him being intimate with me? Why won’t he stop mansplaining?

In need of help

This letter came in today. I feel like I can knock out an answer pretty quickly, so here goes.

Am I being too demanding to want him to live up to his big dramatic promises?

No, but you may be unrealistic in believing that those changes are possible for him after he’s proven a few times that they are not.

Do I owe it to him to keep “working” on the stuff he says he is working on?

What do I do about the fact that I cry when I think about him being intimate with me?

Don’t have sex with him ever again.

Why won’t he stop mansplaining?

I don’t know, he definitely won’t any time soon, and you definitely do not have to listen to even one more mansplanation if you don’t want to.

My clock says it’s just after 4:00 Central Daylight Time, which sounds like a good time for a breakup cake!

To review breaking up:

“Partner, my feelings have changed and I don’t want to be in a relationship with you anymore. I’m so sorry, I hope you will be well.”

I know, I know, it’s never that easy. But it CAN be that easy.

You can’t change people. You can ask them to make small…let’s say…adjustments to certain behaviors to make your life together more harmonious. It’s a bad idea to hang out in a relationship that you only want to stay in if the other person changes a lot. You can’t make the other person change, but you can sure be dicks to one another and make each other miserable and waste a lot of your precious beautiful lives trying to force that change.

Asperger’s is a red herring. He could have it and still be a GREAT partner to you. This relationship has run its course. You’ve tried to hang in and see if it will get better. You’ve been the optimist. You’ve made every allowance. I know it’s sad to think about losing someone who has been so important to you, but this is not making you happy and you can do much better. There is no shame in finding love and losing it again. End it, take a break, grieve, and then find the next thing that makes you happier. Let him be with someone who finds being ignored a peaceful break from having things explained in excruciating detail.