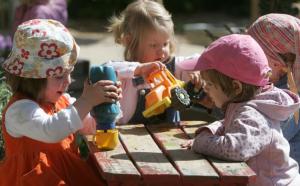 Dear Readers:  If that’s possible, I know even less about parenting than I do about weddings.  Fortunately I know about breakups, and I think this is one of those.  But I think the letter writer could use advice from moms in this exact situation, so you if you can help, weigh in.

I am a single mother by choice of a two-year-old. I work at a pretty decent and stable job and I make an okay salary. My job is relatively flexible and has some good benefits and perks that are very family friendly (five weeks of vacation, lots of sick time), but it’s a full-time job, and I need to be there on a full-time basis. I can take occasional working-from-home days, but it really isn’t a great deal for my employer – taking care of a two-year-old is kinda labour-intensive. Realistically, I need good quality full-time care for him during my working hours.

For the first six months that I was back at work (I didn’t have to return to work until he was 14 months old), a friend of mine with shared gentle parenting values, a stay-at-home Dad with a child a year older took care of him. Eventually he decided that doing childcare wasn’t his thing (though it was a good experiment for him), and I had to look elsewhere for care, in between cobbling together childcare on a day-to-day basis – very stressful.

Through ads on craigslist I found a woman with a busy household of her own who was doing in-home childcare. She was a caring person, but her busy household, her energetic older kids, and an aggressive three-year-old that she was also caring for weren’t a good fit for my rather sensitive son, and although he eventually settled in over about a month and a half (it was very painful at first), I wasn’t sure how long we should continue there. Before I came to any particular decision about it though, the woman who was caring for him got a request from the mother of the aggressive toddler, who also had a one-year-old, to do full-time care for the two of them. License-not-required childcare providers in our province are only permitted to care for two children who are not their own, she had been caring for this mother’s children longer, so she gave me a month’s notice to find alternate care.

A month’s searching (right down to the wire really), and I found a mother who wanted to do childcare in her home instead of return to work now that her daughter was nearing the one-year mark. She actually responded to my rather idiosyncratic ad asking for exactly what I was hoping to find. She and I have very similar values, she lives in a great kid-friendly neighbourhood (although it makes my commutes a little bit long). We agreed that I would pay her the going rate for in-home license-not-required childcare in our area – $40/day, plus I would cover treats (special trips, extra special foods, that sort of thing). We also agreed that she would not be declaring her income, which means that I couldn’t claim my childcare costs on my income tax return, which amounts to a pretty significant tax return difference for me at the end of the year.

My son almost immediately settled right in with her and her daughter, and they all seemed to really enjoy each other. He would talk about them when he wasn’t there and all of the fun things they did, and he frequently didn’t want to go home at the end of the day. This was heaven after all of the stress of dealing with childcare for the previous six months. I could see he was thriving there, she was fun and interesting and we always had interesting chats, and our interactions regarding money seemed easygoing. We checked in several times in the first month and a half to see if the arrangement was working out. She always indicated that it was. She many times told me that they were happy to help me out, if I needed evening care she was happy to do that too – I never took her up on this, as I don’t go out much, and when I do, I get a doting friend to watch him.

A couple of weeks ago it turned out that her grandmother in another province was dying and she would need time off to go to the funeral. Obviously no problem. I cobbled together makeshift childcare for a week – easy enough when you don’t have to do it every week and can trade favours with your friends. Last I heard, she would be back on the following Monday and wanting to work then, so that was our plan. However, come Monday, everyone in our household came down sick with some nasty tummy bug, and so I had the kidlet home with me until Thursday, when I took him over as usual.

It turned out (I hadn’t known this), that she hadn’t made it to the funeral because she agreed to babysit someone else’s kid for an hour the day before they were going to leave, was not warned that said kid had a cold, and her daughter had caught this cold and was too sick to fly. She was heartbroken over missing her grandmother’s funeral and angry at this other woman’s thoughtlessness, and rethinking her entire decision to do childcare at all.

This evening she texted me to say that she’s giving me two week’s notice about changing our arrangement. Now she wants $9/hour and only two days a week.

This is completely unworkable for me. $9/hour would work out to twice the current amount, and 60% of my take-home pay per day after taxes. I can only assume that she hopes this would still be untaxed money for her. If this were full-time I would literally not be able to pay my mortgage.

It will take a near miracle to find good quality care for three days a week, never mind full-time care in two week’s time, and transitioning him to new care is bound to be incredibly stressful, hopefully just for me, but likely for him too. I just don’t know what to do.

I feel so incredibly frustrated. The childcare she does with my son is not what prevented her from making her grandmother’s funeral. I have always been careful to communicate about any sniffles, and I feel I’ve been very accommodating, careful of her feelings, friendly without imposing. My commute, including childcare drop-off and pick-up is two hours every day even though I live a ten-minute (or less) drive from work.

I acknowledge that some of my anger is unreasonable, and is caught up with all of the frustration and difficulty of looking for childcare these other times, being the difficult unpredictably unreliable one at work because of having so much uncertainty regarding childcare (very stressful). Unfortunately, acknowledging that doesn’t really make it go away.

Okay, great, it’s not personal. Even if it feels personal, and like a rejection. And even if it’s in complete opposition to everything that’s gone between us before now. Not that she or anyone else owes me anything.

But this just doesn’t work for me. I don’t think I can make it work, though I guess I may need to in the short term while I search for more childcare and transition over to it. I don’t know how to respond to this. Every time I try to start writing an email to her (trying to follow through on the “it’s not personal” thought), I quickly get bogged down in heavy-handed guilting tactics. I don’t want to do that. But I don’t really know how to stand up for myself without being all angry and guilt-y. Because I don’t want to be all angry and guilty, I frequently don’t say anything, or I even caretake other people in confrontations – making sure that they don’t feel guilty, because I don’t feel bad, honest, it’s all okay really, I understand.

And I don’t want to be a jerk. Her grandmother did just die. She still feels sad and angry about that.

Could you offer your excellent and very straight-forward advice?And obviously, edit this wordy letter for length if you wish, holy hannah, I do go on.

Can’t Really Think of an Acronym, Probably Because I’m Tired and Overwrought

I am not a mom, and I know nothing about daycare – what it should cost, how to find it – zilch.  Maybe some of the other readers here can give you insight about that.  I’m publishing your whole letter without editing, because you’ve told me everything you need in the letter, and I do know something about freelancing and about breakups.

Here’s what you need:

This lady, whatever her reasons, is not that source for you.  So your best solution is to cobble together whatever you can in the short term and jump right now into finding the right long-term solution.

What freelancers do when they don’t really want you as a client anymore but they don’t want to outright fire you (in case they need you someday down the road) is to make the price high and the terms awkward.  If you need it that badly and will pay the price, sure, they’ll put up with the inconvenience.  If the real issue were risk of illness, your daycare provider would have just as much chance of getting a cold in 2 days/week as 5.  So something is going on with how much of her life she wants to trade for how much money, and it may be logical or illogical, and it may be fair or unfair, it probably has nothing to do with you….BUT as you said in your letter – it’s her decision.

You won’t get anywhere by arguing with her or guilting her.  If there is one thing I know about breakups, its that when someone is breaking up with you, the best thing you can do is believe them.  Just believe them. Don’t negotiate, just accept and get out.  The only way you take any power back in this situation is to say:

“I am very sorry to hear that decision, because my son loved coming here and things were working out so well for us.  That arrangement is just not financially or logistically workable for us over the long term.  Please let me know if you do change your mind, because we would love to come back under the old arrangement/costs.”

Then, if you still need her short-term, work something out for that.  That’s where a little guilt comes in handy.  “I respect your decision, obviously, but is there any way you could give us two or three more weeks at the old rate while I find someone new?  This really puts me in a bind, and I need a little time to find a good situation for him.”

I’m sorry, it sucks, but you are not going to help yourself or your son by sinking any more energy into this relationship, and if you make her feel guilty you just damage any ability to salvage it down the road when perhaps this crisis has passed.  Put together whatever you can in the short-term and go back to finding the long-term fit.

Finally, cut yourself a break.  This is hard stuff.  Your child might end up in some situations that are “safe, friendly, reliable, and pretty good” vs. “amazing/perfect/justexactlywhatyouwoulddo” while you work this out.  The situation that is safe and workable for your son and that takes some stress off of you financially and in terms of commute time is a good solution.

6 thoughts on “Reader question #34: My childcare provider just dumped me.”