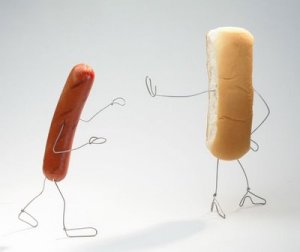 Over at SexyTypewriter, there is a discussion about the best way to tell someone that you don’t want a second date.  “See you soon” is probably not that way. “I could stop thinking about you” has the advantage of being honest, and the writer describes that awkward end-of-date feeling of “oh god…so many expectations and ways this could go wrong….oh god.”

I’ve done a lot of internet dating, and early on I was very optimistic about people.  I looked for the good in everyone, I thought of ways to make things work, I talked myself into being attracted (hey, why not?), and I enjoyed the act of meeting new people for its own sake. Most people were not The Man Who Would Not Break Eye Contact or Gropey McTicklefight, most people were just disheveled nerds like me, and while I didn’t make many lasting connections I did have a lot of fun nights out of the house and discovered a lot of cool pockets of Chicago when I was new in town.

While I was very willing to go on first dates and meet people, I was pretty picky about who I spent further time with.  I’m an introvert at heart and while I love friends and a good time and conversation often I find myself asking the question “Will this be a better time than screenwriting/finishing this novel I’m reading/playing CIV/being in a completely silent room full of silence?”

I also had numbers and our sexist dating culture going for me.  I was a woman with a nice smile and huge…tracts of land… and an ability to be entertaining and keep a conversation going, so I just had to sit and look pretty and wait for people to write to me and then accept or reject them.  I didn’t have to work at finding people to date, they came to me.  So there was an unbalance in some of those interactions from the start – I might think “Hey, this guy seems nice and I’m free tonight, why not?” while the guy might be overjoyed at finally getting a response after weeks of getting no response and think “She must really like me to write back at all, this is so on!”

What I’m saying is that there were a lot of perfectly fine first dates that did not lead to a second date.  At 25, did I handle this in a straightforward, cool, honest, mannerly way?  No.

What would happen is that at the end of the first date the guy would ask me out for a second date and in the moment, under pressure, I’d agree.  He’d say “We should do this again sometime” and instead of saying “Nah, I don’t think so” I’d say “Sure, that sounds great” and he’d say “Howabout Saturday?” and I’d say “I don’t think I have anything planned that day.”

Then Saturday would get closer and I’d start dreading the date.  Not because the guy was a bad person, just, there was no actual connection there and now I was committed.  Sometimes I’d be too chicken to say anything and find myself on that second date, walking through some neighborhood summer music and food fest, speaking in monosyllables.  Sometimes I would just cancel.  “I’m sorry, I forgot that I have other plans this weekend, catch you later.”

Most times the guy would understand.  “Hey, it’s okay, though I’m obviously bummed out.  Can we reschedule?” And then, when pushed to it by a direct question, I would finally muster the ability to be direct. “Um, I don’t think so.  You are nice but I’m just not feeling it,” and the guy would be (understandably) frustrated and say “Okay, but why didn’t you just say so in the first place?”

This is a legitimate question.  I was not behaving well by agreeing to dates and then cancelling them, but there was a reason I didn’t just say no in the first place.  I didn’t know how.  Also, I was afraid of Angry Guy.

Angry Guy responds to a cancelled date like this:  “But you SAID you were FREE and you AGREED and PROMISED now you are just being a FLAKE like ALL OTHER WOMEN.”  In which case, bullet dodged – you don’t want to spend more time with Angry Guy – but what happens when you turn Angry Guy down in person?  Angry Guy is pretty scary.

I’m relying on the work of Gavin de Becker here, his book The Gift of Fear is an incredible read and one of the most useful books about human psychology that I’ve ever come across.

Creepy guy near eL station: “Those groceries look heavy, can I carry them home for you?”

Creepy guy near eL station: “Well, you don’t have to be such a bitch about it. I was just OFFERING to HELP.”

25-year-old me would stew all the way home, worried about hurting the feelings of the creepy guy near the eL station and wondering if I should have done something differently.  37-year-old me knows that you don’t have to worry about hurting the feelings of sketchy people on a dark street who offer you “help” you don’t want and then call you names when you turn it down.

Let’s pause briefly for some Basic Important Safety Stuff:  “No” is a complete sentence.  If you say “no,” and the other person keeps talking and trying to convince you to go along with whatever it is they want, do what you can to extract yourself from the situation. This person is trying to manipulate you, and you don’t have to let yourself be manipulated.  And if you hear a “no” from someone, the correct response is to back off immediately.  No insults, no whining, no pressure.  Just say “Okay, sorry to hear it” and move away.

25-year-old me was so afraid to say no that she’d agree to dates she didn’t want to go on just to avoid hurting someone’s feelings or provoking an encounter with Angry Guy.  37-year-old me (and hopefully you, at whatever age you are) would handle it differently.

If you’re just not sure, buy yourself time.  “Hey, thanks for asking.  I had fun tonight, but do you mind if I think about it and call you in a day or so?”

If you are sure, and you’re sure that the person won’t turn into Angry Guy (or Girl – she is also scary) you can just say so.  “Oh man, thanks for asking.  This is really awkward, because I had a good time tonight, but I’m not feeling that pull with you and I’d rather not.”

Ideally this is not an exchange you are having in person.  I mean, the best case scenario is that you say your goodbyes after a date and then go home and think it over, and everyone leaves the door open for either further contact or a graceful end.

That’s why one of the best responses in the SexyTypewriter threads, from poster Monsterzero, is this one:

My interpretation of online dating etiquette is that at the end of the first date, I don’t ask for a second date commitment, because I don’t want to force an immediate decision. I do commit to further communication, and that’s how we set up the second date. Partly because I’m chicken and would rather not be rejected to my face, and partly because I’m kind of a big scary-looking guy and I don’t want a yes-let’s if she doesn’t mean it.

I really like that part where he is thinking about the safety and the feelings-of-safety of the woman and making sure he’s No Pressure Guy.  I want No Pressure Guy to have all the dates with all the direct, honest, sexy No Pressure Ladies!

If you’re both feeling it, it will happen.  You managed to go on one date, so presumably you know how to set up another one if you need to, and email is kinder if we have to take a detour to Rejectionland.

Readers, what’s your best/worst rejection story?  Has anyone else let themselves get roped into going on unwanted second dates because you’re too chicken to say “no”?